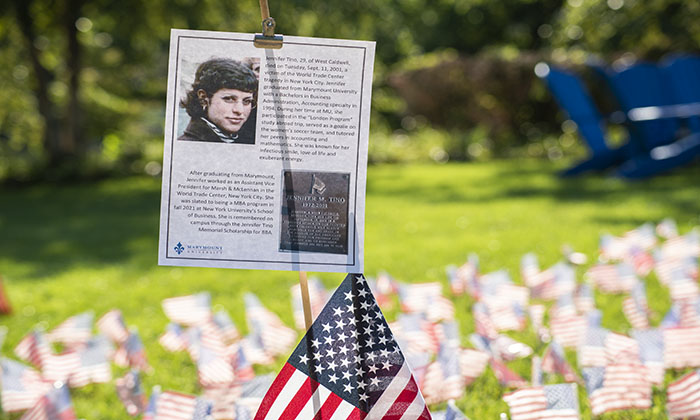 Twenty years ago, the entire nation was shaken after thousands of Americans perished as a result of multiple terrorist attacks on September 11, 2001. Marymount University paid homage to the memory of the more than 2,900 victims and their families during multiple 9/11 memorial events held on campus.

On the morning of September 10, Marymount students, staff, faculty and community members placed 2,983 American flags on the grounds of Ireton Lawn in a display of remembrance.

“I’m from New York, so I know a lot of people from my hometown who were firefighters and police officers and who passed away during 9/11,” explained Maddy DeMarco, a senior at Marymount. “I was almost three years old when it happened, but I will never forget.”

Among the volunteers was adjunct Professor of Psychology and Marymount alumni, Michael Petrovich, who carefully placed 26 flags into the soil himself.

In 2001, Petrovich was a 32-year-old Army Specialist based at the Pentagon. He was inside one of the rooms of the building that was hit by Flight 77 and managed to survive, although wounded by the blazes that erupted following the crash.

“Twenty-six of these people,” Petrovich said gesturing to the display of flags, “were friends of mine.”

The campus community continued to honor the victims throughout the morning during four moments of silence, acknowledging the times when the North and South Towers of the World Trade Center were struck in New York, the attack on the Pentagon and the crash of Flight 93 in Shanksville, Pa., which is believed to have been on its way to Washington, D.C., and targeting the U.S. Capitol before passengers fought back against the hijackers. 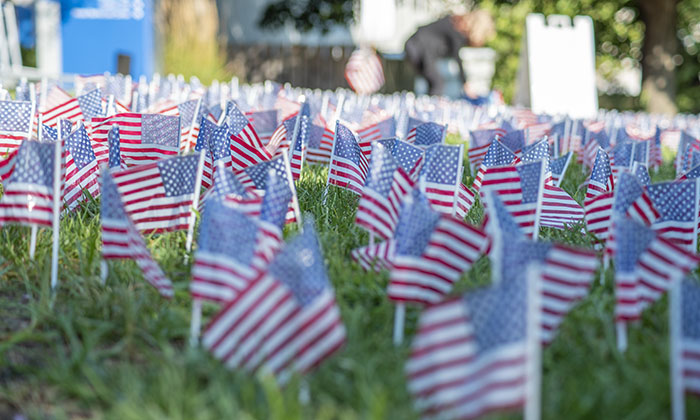 On that day, Marymount lost one of its own Saints, as Dr. James Ryerson, Director of Marymount’s School of Business, pointed out during a formal ceremony held at Ireton Lawn in front of the flag display.

Alumna Jennifer Tino graduated from Marymount in 1994. Dr. Ryerson recalled her giant smile, and the way that many saw her on campus with a baseball cap and her ponytail swishing back and forth. Tino played on the Saints Women’s Soccer team as a goalie, and she also participated in a study abroad trip to London.

She was a gifted student who graduated with a bachelor’s degree in Business Administration (BBA) with a specialty in Accounting, and tutored her peers in Accounting and Mathematics. Following graduation, Tino became an Assistant Vice President for Marsh McLennan at the World Trade Center.

Her memory is honored on campus through the Jennifer Tino Memorial Scholarship, awarded to an undergraduate student pursuing a BBA. 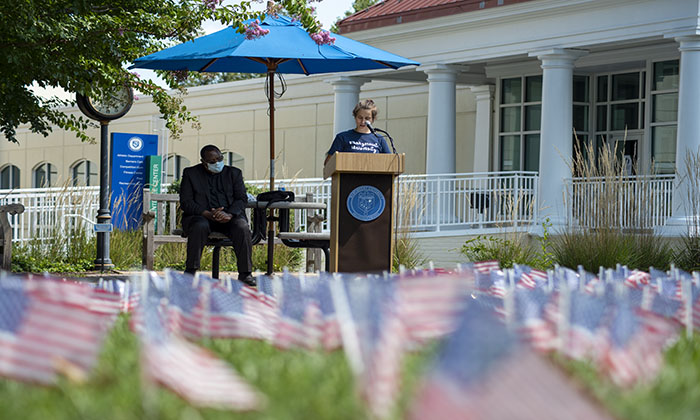 In memory of all the lives lost, volunteers read the names of each victim during the 9/11 memorial ceremony. President Irma Becerra began the reading, followed by faculty, staff and students, like junior Stef Socher.

“To me, this meant paying honor to the people who lost their lives during 9/11 and not just those who were in the Towers, but also those who helped, like the first responders,” Socher said. “We as students, who are young, should never shy from making an impact for a better world.”