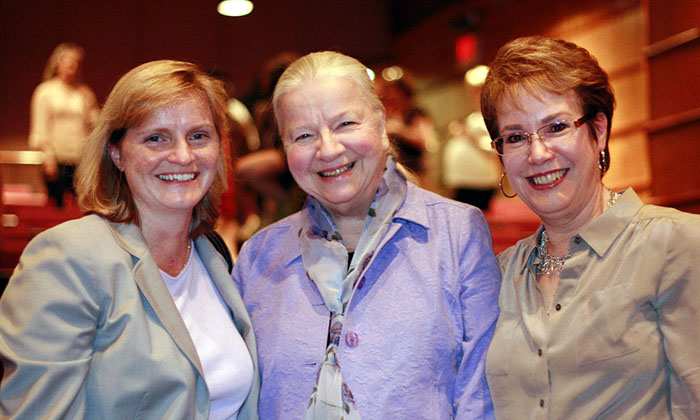 Last week, Dr. Lillian Bisson – a professor emerita who gave 41 years of service to Marymount University and is still a revered figure within the institution’s academic circles more than a decade after her retirement – passed away at the age of 80.

The scholar of medieval literature, remembered well for her record of scholarship, teaching and service, was an English faculty member at Marymount from 1969 to 2010, a time spanning three different MU presidents’ administrations. Since then, she has served in an advisory capacity with the Literature & Languages program.

“She made so many students’ lives so much richer. She was a steadfast advocate for ways to fully engage students and faculty, and displayed civility and compassion for everyone she met,” said Dr. Marguerite Rippy, Emerita Professor of Literature & Languages at Marymount, and a close colleague and friend of Dr. Bisson’s for more than two decades. “For many of us, she was the first person we met at Marymount, and she recruited generations of students and faculty through the power of her gentle, incisive and complex mind. She was truly a blessing.”

After earning her doctorate from Florida State University in 1969, Dr. Bisson moved to the national capital region and joined the Marymount faculty. Over the years, she held positions as Chair of the Literature & Languages department and Director of Marymount’s graduate program in Humanities. Her primary field of interest was late medieval literature, particularly Chaucer and Dante studies, as well as feminist studies, especially relating to Jane Austen and Virginia Woolf.

Her book, “Chaucer and the Late Medieval World,” was selected by Choice as an Outstanding Academic Book of 1998, and was described by Speculum as a “systematic and clear survey of social contexts, historical traditions and critical issues.” Both the Virginia Foundation for the Humanities and the National Endowment for the Humanities awarded her grants for summer institutes to enrich the background of high school teachers in medieval studies. She also served as a program officer for the National Endowment for the Humanities.

“Lillian was an ideal role model – a seasoned and accomplished teacher, a generous and encouraging mentor and colleague and a loyal and trusted friend. She was the glue that held our department together – under her generous leadership, we became not only colleagues but good friends,” recalled Dr. Karen Waters, Emerita Professor of English at Marymount who also retired from the University in 2010. “She was the living embodiment of one of her favorite quotations from Chaucer’s description of the Clerk in ‘The Canterbury Tales’ – ‘and gladly would he learn, and gladly teach.’ Lillian did both with devotion and excellence.”

One year before her retirement from Marymount, the University ensured that Dr. Bisson’s name would live on well into the future. The Bisson Lecture in the Humanities, an annual program established in 2009, invites a distinguished scholar to campus to deliver a lecture on a topic of humanistic inquiry with broad, interdisciplinary interest. Recent lectures include Dorsey Armstrong’s “King Arthur and the Knights of the Public Humanities: Literature in the Classroom, on Guided Tours and on Screen,” Brigitte Fielder’s “Antislavery Children’s Literature and Twenty-First Century Antiracism” and Marlene Tromp’s “Bloody Murder: Solving Victorian Crimes with Forensics and the Humanities.”

The year following the establishment of the Bisson Lecture in the Humanities, Dr. Susan Fay – another Emerita Professor at Marymount – delivered remarks dedicated to Dr. Bisson at the Faculty Recognition Luncheon in April 2010. She reflected on various aspects of the professor’s tenure – from her numerous teaching awards to her exceptional involvement on University committees and time as President of the Marymount Faculty Association. She also remembered how Dr. Bisson’s actions always spoke louder than words when it came to the many acts of kindness she showed to her MU friends and colleagues.

“Having called me on the phone to express her condolences on a death in our family, she not only arranged to have my classes covered so that I could attend to this crisis, she and [her husband] Art turned up on our doorstep when we returned from the funeral, casserole in hand. I knew then this wasn’t your ordinary department chair,” Dr. Fay told the audience. “Forty years is a long time to spend at an institution, and it is possible, I guess, to reach that mark quietly. Lillian’s voice, however, though gentle, has been anything but quiet. Words are our stock in trade in the English department. It is particularly appropriate, then, that she has used her voice and words to help shape this institution, its programs and most importantly its students.”

That influence is still being felt throughout Marymount’s Literature & Languages program to this day. Current professors, many of whom have worked closely with Dr. Bisson since joining the University themselves, are mourning her loss while also remembering her legacy and the deep impact she left on them personally.

“We shared office space for the first four years of my time at Marymount, and I hear her soft, firm, thoughtful, patient voice in conference with students in the back of my mind. Her ability to pause, to let silence and space for reflection be there is a skill I still one day hope to gain,” said Dr. Tonya-Marie Howe, Professor of Literature & Languages at Marymount. “She was full of grace, wisdom, humor and strength. Her students got the very best – a caring mentor and teacher who paid attention to each and every person as they came to her.”

“Lillian was an incredibly selfless friend and mentor. She always had time for her students and colleagues, and whatever issue I was facing I always felt better after talking with her about it,” added Dr. Holly Karapetkova, fellow Professor of Literature & Languages at Marymount. “She cared deeply for our community and made Marymount into a place that felt more like a family than a job.”

Dr. Bisson was laid to rest this past Sunday at St. Luke Serbian Orthodox Church in McLean, Va. In lieu of flowers, community members are encouraged to donate to a scholarship at Marymount University in her name or to make a memorial donation to PAX Community.