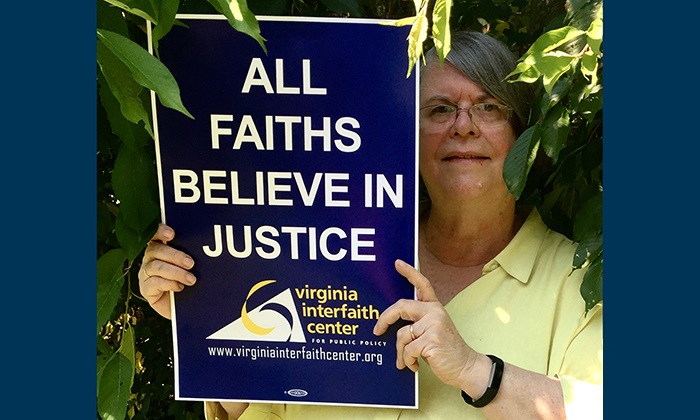 As she attended Catholic school growing up, Stephanie Niedringhaus remembers one of the earliest religious lessons that she learned – that we are all made in the image of God, and that every life is sacred.

Years later, she looks back and sees how that simple precept has guided her work in Catholic social justice activism.

“I’ve never understood how anyone can profess those beliefs while supporting the death penalty, or opposing universal access to lifesaving health care,” Niedringhaus explained. “At different times in my life, I have had the privilege of meeting two of my personal heroes – Sister Helen Prejean, who speaks with great clarity about the immorality of capital punishment, and Sister Joan Chittister, who said a fully Christian life demands prophetic action. In short, it isn’t enough to simply say that the death penalty is un-Christian. I must do something about it.”

The Marymount alumna (she holds a M.A. in Humanities) and Northern Virginia resident has made a career and life out of taking action. She devoted more than 20 years to working for NETWORK, the national Catholic social justice lobby in Washington, D.C. There, Niedringhaus worked behind the scenes to shape the organization’s message – working with national media outlets, editing NETWORK’s magazine, writing articles on social justice issues and overseeing NETWORK’s social media presence.

After retiring in 2016, her activist streak continued as she joined the Ignatian Volunteer Corps (IVC) and later was placed as an IVC volunteer with the Virginia Interfaith Center for Public Policy. Throughout these years, Niedringhaus has dedicated herself to an issue agenda that includes the abolishment of the death penalty, health care for all, criminal justice reform, racial equity, economic justice and more.

“As the daughter of an immigrant, I am passionate about the right of immigrants to be treated with dignity and respect,” she said. “As the parent of a son with special needs, I am drawn to health care advocacy. And as someone who cares deeply about racism and violence, I am also passionate about abolishing the death penalty.”

Years of Niedringhaus’ social justice activism, which included organizing bus trips to Richmond to allow advocates to lobby elected officials of the Commonwealth, helped lead to passage of legislation this March that abolishes capital punishment.

“I had tears in my eyes,” she reflected.

With the bill’s signature from Governor Ralph Northam, Virginia became the first Southern state to abolish the death penalty – joining 22 other states who have repealed it and three others that have implemented moratoriums on the practice. The death penalty, which has roots in the Commonwealth that date back to 1608 in Jamestown, has been utilized more in Virginia than any other U.S. state.

“However, national opposition became even stronger in recent years as later DNA evidence showed repeatedly that innocent defendants had been sentenced to death,” Niedringhaus said. “A confluence of powerful forces came together this year…leading to Virginia making history in a positive way. Thank God!”

Niedringhaus credits her studying of Humanities at Marymount with setting a foundation for her advocacy work. In college and graduate school, she sought to deepen her understanding of the human spirit through courses in philosophy, languages, history and the arts, and was encouraged “to see the worth and dignity of every person.” During her years at Marymount specifically, she found herself immersed in subjects like ethics, modern literature and medieval poetry.

“By teaching me to be more reflective and empathetic, Humanities studies strongly reinforced my desire to respond to the Gospel call to act for justice in today’s world.”

Today, Niedringhaus spends most of her time in the service of the IVC – a group of laity volunteers who aim to make a difference through service while nourishing their own faith. Members use their life experience, wisdom and skills within nonprofits and agencies to transform the world through justice that is rooted in Gospel values.

“After decades of activism, I never expected to spend my retirement years simply resting,” Niedringhaus said. “I knew I needed to feed my soul by being part of something that combined faith with action.”