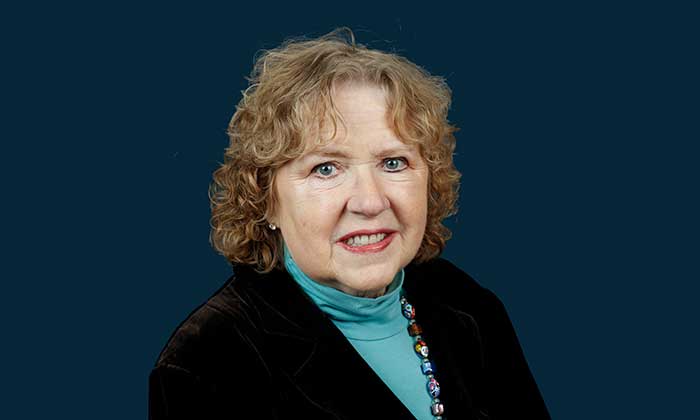 Marilyn Peterson, an adjunct associate professor in Marymount University’s Forensic & Legal Psychology program and a 40-year veteran of the intelligence field, was selected as the first-ever recipient of the International Association for Intelligence Education’s (IAFIE) Lifetime Achievement Award.

Her award also includes the additional designation of Distinguished Fellow.

Peterson served as the head of IAFIE from 2009 to 2011. Those were the formative years of the Association, which was created to promote the teaching of intelligence in the areas of national security, law enforcement and competitive or business intelligence. During her tenure, IAFIE held its first-ever international conference in Ottawa. She was previously President of the International Association for Law Enforcement Intelligence Analysts (IALEIA), and since 2019 has served as President of the DC Metro Chapter of IALEIA.

For many years, Peterson was a master instructor at the Joint Military Intelligence Training Center under the Defense Intelligence Agency in Washington, D.C. As part of her duties there, in addition to teaching analysis and other subjects, she led the Intelligence Community Centers for Academic Excellence program. She retired from that role in 2017.

Peterson’s latest article, “Association Analysis,” was published in the peer-reviewed Journal of Intelligence and Analysis (JIA) in 2019. She was also the primary editor and contributor to Applications in Intelligence-Led Policing: Where Theory Meets Reality, published in 2018, and editor of JIA Special Edition, “Intelligence Training and Education,” which was released in April of 2015.

Peterson sits on the IALEIA’s Executive Advisor Board, is a Regent Emeritus of the Association of Certified Fraud Examiners and is a Certified Master Instructional Designer. She has previously received Lifetime Achievement Awards from IALEIA, the Society of Certified Criminal Analysts and the Thomas Edison State College Alumni Association. She holds a B.S. in Human Services with a concentration in Criminal Justice, and a M.A. in Education.