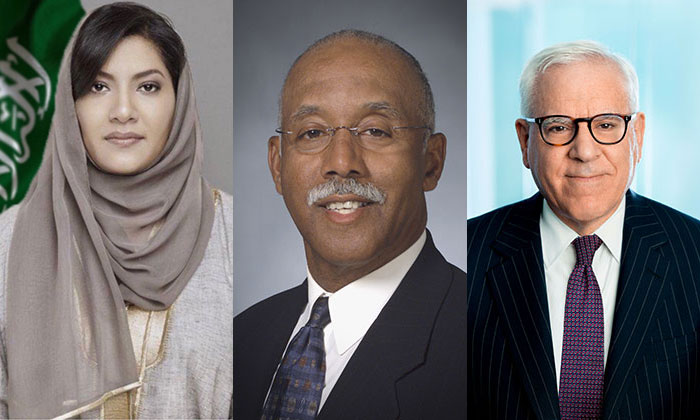 All three commencement speakers will receive honorary degrees during the following ceremonies, which are organized by College with each including undergraduate and graduate students:

The ceremonies will include students who qualify for graduation from the Fall 2021, Spring 2022 and Summer 2022 semesters, as well as students who graduated in Summer 2021 but did not participate in last year’s ceremonies. They will be held outdoors on the Converse Family Field on Main Campus. See below for more information on the commencement speakers. 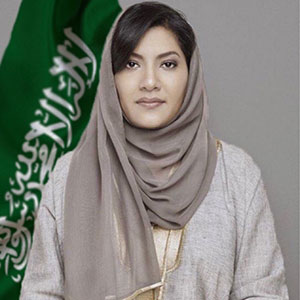 Appointed Ambassador to the U.S. in 2019, Princess Reema bint Bandar bin Sultan bin Abdulaziz Al Saud is the first woman in the history of Saudi Arabia to serve in her position and has been a prominent figure in advocating for increased gender equity and women’s empowerment in her home country.

She began her public service career in 2016 as Vice President of Women’s Affairs at the Saudi General Sports Authority, and later served as President of the Mass Participation Federation – making her the first woman to lead a multi-sports federation in Saudi Arabia. In addition to her current Ambassador role, she is a member of the Saudi Arabian Olympic Committee, the International Olympic Committee’s Women in Sports Commission and the World Bank’s advisory council for the Women Entrepreneurs Finance Initiative.

Prior to public service, Princess Reema was the CEO of a luxury retail company that commissioned a study on obstacles for women in the workplace, resulting in the opening of the first workplace nursery in a retail store. She also founded the social enterprise Alf Khair, which aims to elevate the professional capital of Saudi women through financial self-sufficiency.

Princess Reema’s local ties are extensive – growing up in nearby Fairfax County, Va., after moving to the U.S. at the age of seven, as well as attending George Washington University and earning a bachelor’s degree in museum studies. Click here for full biographical information on Princess Reema. 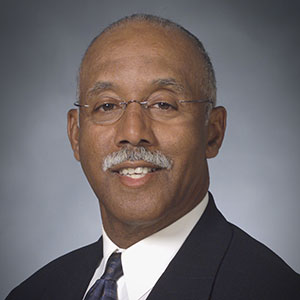 Dr. Julian M. Earls, a Virginia native, was Director of NASA’s Glenn Research Center at Lewis Field in Cleveland from 2003 to 2005, and previously served as Deputy Director. Responsible for planning, organizing and directing the Center’s missions, he engaged in research, technology and systems development programs in aeronautical and space propulsion, space power and communications and microgravity sciences in combustion and fluid physics. He oversaw 24 major facilities and more than 500 specialized research facilities with a $773 million annual budget.

Since beginning his NASA career in 1965, Dr. Earls has written 28 publications for technical and educational journals – including the first health physics guide used at NASA. He’s been awarded NASA medals for exceptional achievement and outstanding leadership, and also received the Presidential Rank Award of Meritorious Executive.

A trailblazer for diversity, Dr. Earls became the Center’s first African American section head, office chief, division chief and deputy director over the course of his career. He’s well known for his generous mentorship of employees and students, and is an active proponent for equal opportunity. He was elected into the inaugural class of the National Black College Alumni Hall of Fame, and founded the Development Fund for Black Students in Science and Technology – an endowment that raises scholarships for Black students who major in technical disciplines at historically Black colleges. 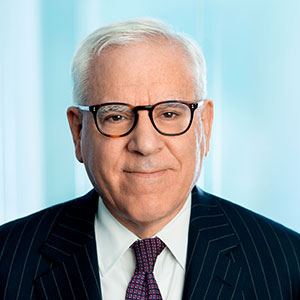 Forging a distinguished career in law, government and business, David M. Rubenstein is co-founder and co-chairman of The Carlyle Group – one of the world’s largest and most successful private investment firms, now managing $301 billion from 26 offices around the world. Prior to establishing Carlyle in 1987, he practiced law and served as Deputy Domestic Policy Advisor in the Carter Administration.

In addition to his wide-ranging business interests, Rubenstein is an active philanthropist. He is Chairman of the boards of the John F. Kennedy Center for the Performing Arts, the Council on Foreign Relations, the National Gallery of Art, the Economic Club of Washington and the University of Chicago. He also serves on the boards of Memorial Sloan-Kettering Cancer Center, Johns Hopkins Medicine, the Institute for Advanced Study, the National Constitution Center, the Brookings Institution, the Lincoln Center for the Performing Arts, the American Academy of Arts and Sciences and the World Economic Forum.

Rubenstein is a graduate of Duke University and the University of Chicago Law School. Click here for full biographical information on Mr. Rubenstein.