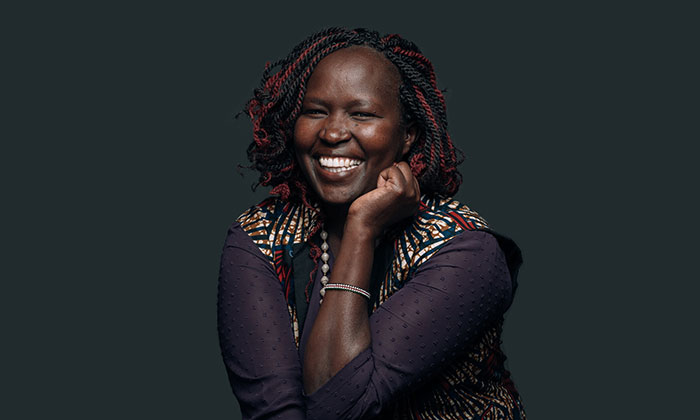 “When you educate a girl, you transform a community.”

Those words form the foundation of “Kakenya’s Dream,” an international nonprofit organization based in Kenya that aims to educate girls, end harmful traditional practices like child marriage and female genital mutilation (FGM) and uplift communities. On Thursday, its Founder and President – Dr. Kakenya Ntaiya – appeared virtually as the featured speaker in the latest edition of Marymount University’s Mux Leadership Series, a thought-provoking series of presentations and conversations designed to turn motivation into actions and ideas for change.

“It’s such a painful experience that so many girls go through – not just where I’m from, but all over the world,” Ntaiya told the audience of Marymount students, faculty and staff. “In my village, we were silent about FGM. We had seen girls bleed to death, I had seen mothers having difficulties giving birth because of FGM – but we didn’t talk about it because it would traumatize us. It’s violence against women, and it’s designed to put women down.”

Her life was set to follow the traditional Massai path of ending school to become a wife and mother, but Ntaiya had a different dream. She negotiated with her father to return to school after undergoing FGM, with the hopes of becoming a teacher. When she was accepted to college in the U.S., she promised her rural Kenyan community that she would use her education to help the village in exchange for their support. Ntaiya went on to earn her Ph.D. in Education and returned to her community to fulfill her promise.

“I grew up where there was no library, no electricity, no bathrooms – so going away to college significantly impacted who I am today,” Ntaiya explained. “When I went back to Kenya, I still found young girls getting married. I still found girls getting mutilated, and I still found that their hopes were diminished. I figured out the best way for me to help my community was to build a school for girls.”

In 2009, the Kakenya Center for Excellence boarding school opened its doors, serving 30 students. Today, Ntaiya reaches thousands of young girls and community members each year through three holistic and girl-centered programs she pioneered at Kakenya’s Dream.

During the Mux Leadership Series event, Ntaiya shared statistics to demonstrate her organization’s success. More than 500 girls have enrolled in the Kakenya Center for Excellence since 2009, and 100 percent of boarding school girls and alumnae have continued their education and avoided FGM and child marriage. Over 14,000 boys and girls have been educated and empowered through health and leadership trainings, and 224 young women in high schools and universities have received mentorship, tutoring, career counseling and scholarships through the Center of Excellence.

“For every year that a girl stays in secondary school, her future wages increase up to 20 percent, which helps her and any children she may have later escape a cycle of poverty,” Ntaiya added. “Our first girls are currently graduating from college and transitioning to jobs, while we’re looking to complete construction on a second campus and build a child-friendly clinic.”

Ntaiya was featured in Melinda Gates’ first book, The Moment of Lift, and is a proud CNN Hero finalist and National Geographic Emerging Explorer. She was honored to receive the Feminist Majority Global Women’s Rights Award in 2013 and the Vital Voices Global Leadership Award in 2008. Ntaiya was also recognized by Women in the World as a “Woman of Impact,” named one of Newsweek Magazine’s “150 Women Who Shake the World” in 2011 and counted among the “Women Deliver 100: The Most Inspiring People Delivering for Girls and Women.”

As she looks to the future, Ntaiya is focused on continuing to leverage education to empower girls and transform rural communities.

“When women get jobs and money, they plug a lot of it back to their family and their communities,” Ntaiya said. “Educating girls could add $92 billion to the economies of low and middle-income nations, cut child deaths by 50 percent, reduce child marriage by 66 percent and has the potential to decrease violent conflict by as much as 37 percent.”

“To improve the lives of everyone in our communities, we need to invest in girls.”