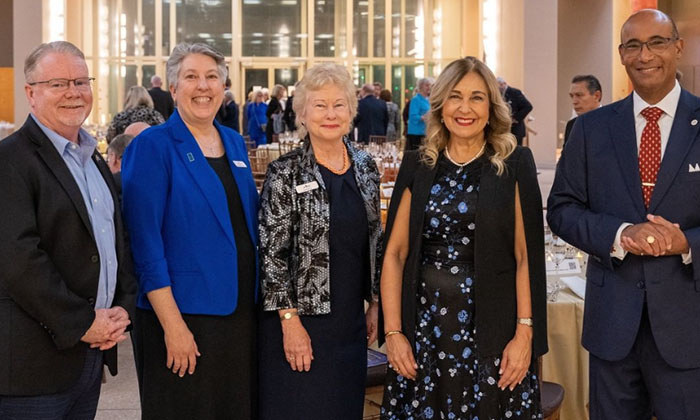 Honorees at the recent Washington, D.C. Awards Gala for SOAR! (Support Our Aging Religious) offered personal tributes to the religious who shaped their lives and work, and praised SOAR! for its outreach to aging and infirm religious across the United States.

During the Nov. 2 gala at the Embassy of Italy in Washington, SOAR! presented Saint Elizabeth Ann Seton Awards to Irma Becerra, Ph.D., the president of Marymount University in Arlington, Virginia; and to Dr. Norvell V. “Van” Coots, the president & CEO of Holy Cross Health in Maryland. The award is named for St. Elizabeth Ann Seton, the foundress of the Sisters of Charity in the United States and the first U.S.-born citizen to be declared a saint. The award named in her honor is presented to recipients who have distinguished themselves through their leadership and generosity in the Catholic community in the spirit of St. Elizabeth Ann Seton.

Also honored at the event was Michael F. Curtin Jr., the CEO of DC Central Kitchen, who received the Father Bob Brown, OSFS Good Samaritan Award, which is named in honor of the late Father Brown, an Oblate of St. Francis de Sales and pastor in Northern Virginia who served as a SOAR! Board Member and was an ambassador for SOAR! and its mission. The award recognizes individuals in leadership of a ministry in this community who model the Salesian values which Father Brown lived and who serve by the motto, “the measure of love is to love without measure.”

Since its founding by concerned Catholic lay people in 1986, the mission of SOAR! has been to increase awareness of the needs of vulnerable and aging religious sisters, brothers and priests and to raise funds to ensure their safety, dignity, and peace of mind.

The donations raised at this year’s gala will go to SOAR!’s Emergency Response Fund which allows the outreach program to respond immediately when the need is greatest, such as when a generator breaks down in the middle of winter or a hurricane strikes.

After receiving the Saint Elizabeth Ann Seton Award, Irma Becerra, who became the president of Marymount University in 2018, praised the Religious of the Sacred Heart of Mary who founded the university, and that order’s vision from the 1800s of providing a strong education for women that continues today with Marymount’s career preparation and opportunities for personal growth for both men and women.

Speaking of the impact that religious have had in her life, Becerra noted, “I had the great privilege to be educated by religious sisters from my first day in pre-school all the way through high school. Through their guidance, I learned how to be intellectually curious, how to be disciplined and how to be tenacious. They certainly made a great impact on me and who I am during my formative years.”

As Marymount’s president, Becerra launched its new strategic plan, added market-driven academic programs and has overseen its transition to a new academic structure, and also navigated the school community through the COVID-19 pandemic.

Before receiving the Saint Elizabeth Ann Seton Award, Dr. Norvell Coots was introduced by Holy Cross Sister Sharlet Wagner, the executive director of the Newcomer Network of Catholic Charities of The Roman Catholic Archdiocese of Washington. She praised him as “a man who epitomizes service.” She noted that Dr. Coots was a recipient of the 2018 Distinguished Healthcare Leader Award, and praised him for “his commitment to the values of the Holy Cross Sisters and to the health and well-being of the community he serves.”

Dr. Coots retired from the United States Army in 2016 as a brigadier general, after previous work including serving as commanding general of Regional Health Command Europe, assistant surgeon general of the Army, as surgeon general for the U.S. forces in Afghanistan and as the final commander of the Walter Reed Army Medical Center in Washington. His military awards include the Distinguished Service Medal, and he has been awarded the Legion of Honor from France.

After receiving his award from SOAR!, Dr. Coots noted that like St. Elizabeth Ann Seton, “I was not born Catholic but became one later in life. It was the system of education that she is credited with creating, the U.S. parochial school system, that put me on the path to where I am today.” He noted that he and his family like to stop and pray at the Grotto of Lourdes at Mother Seton’s shrine in Emmitsburg, Maryland, and that he is a pilgrimage doctor to the shrine and grotto at Lourdes in France.

“So I am honored that my life has intersected with hers in these and other ways, and I now receive an award reflective of her life and service,” he said.

As he concluded his remarks, Dr. Coots offered “most humble thanks to all the men and women religious who have given me guidance along my path, at some of the most important inflection points in my life, whether in my career in the Army or my career now in civilian healthcare.” And he noted his “very special appreciation to MY sisters of the Holy Cross whose healthcare legacy I safeguard, and whose charism guides me daily.”

Michael Curtin, the recipient of SOAR!’s Father Bob Brown, OSFS Good Samaritan Award, graduated from Gonzaga College High School in Washington, which is sponsored by the Society of Jesus. He earned a bachelor’s degree in religion from Williams College in Williamstown, Massachusetts. Curtin joined DC Central Kitchen in 2004 and has greatly expanded its initiatives, including its Fresh Start Catering that provides locally sourced, scratch-cooked meals to schools across Washington, increased investments in purchasing from local farms, and a wholesale business distributing fresh fruits and vegetables to corner stores in D.C.’s food deserts, and two cafes. These programs now generate more than $8 million annually and employ more than 170 people, one-half of whom are graduates of the DC Central Kitchen’s Culinary Job Training Program.

In presenting Curtin with the Father Bob Brown, OSFS Good Samaritan Award, SOAR! noted that his “life, education and work embody the Catholic values we hold so dear and will help us to highlight the vital needs of aging religious in the United States who have selflessly served God’s people through their work.” SOAR! noted that Curtin “exemplifies the spirit of Father Bob Brown and the meaning of being a Good Samaritan.”

In a letter in the program for SOAR!’s gala, Washington Cardinal Wilton Gregory praised its outreach, its honorees and its supporters, and he wrote, “The women and men religious who have blessed my life are countless, and I am sure that each of you can recall a sister or brother or religious priest who taught you, cared for you or prayed for you.”

Also in the program for the SOAR! gala, Sister Kathleen Lunsmann, an Immaculate Heart of Mary Sister who serves as its president, praised its supporters “for your commitment to ensuring that our aging religious live with the dignity they deserve.” She added, “In light of these challenging times, the needs of our aging sisters, brothers and priests have never been greater.”

For more information on SOAR!, go online to www.soar-usa.org.

Read the original story on the Catholic Standard’s website.