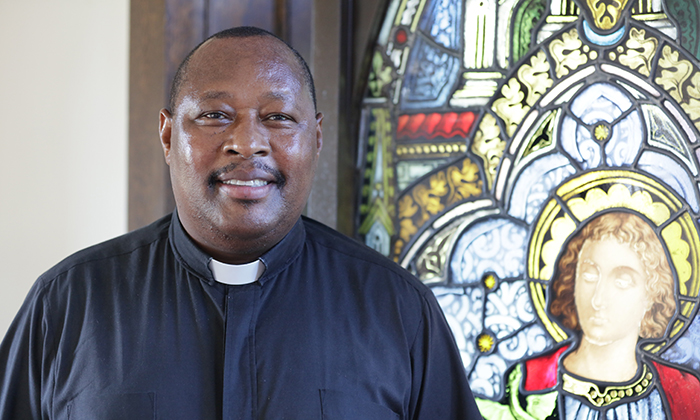 A new Catholic chaplain, Father Gabriel Muteru joined the staff at Marymount University in Arlington this academic year as part of the institution’s Office of Ministry and Spiritual Life. He was appointed by Bishop Michael F. Burbidge in August.

As chaplain, Father Muteru, a native of Kenya, leads liturgical and sacramental celebrations, pastoral care and ministerial programming within Catholic Campus Ministry. He is fluent in English, Swahili, Kikuyu (a Bantu language spoken in Kenya) and Spanish, and does scholarly reading and research in French, Latin, Greek and Hebrew. He celebrates Mass in Spanish and English regularly at the Sacred Heart of Mary Chapel on Marymount’s main campus.

Marymount President Irma Becerra said the university appreciates Father Muteru’s global perspective and his experience serving others, both “offering services to the poor and providing for the spiritual needs of his ministry.”

“During my time spent in Kenya, Spain, Germany, Italy, Sweden, Belgium, France, Israel and the U.S., I have found that all humans are the same — but also different. There is a common human nature in every society, while there is also diversity in every society,” he said in an interview on the Marymount website. “This is a reality we face anywhere and everywhere we go, and for that reason, diversity must be respected and inclusion must be encouraged. Diversity in culture, language, customs, thought and lifestyle only makes a society richer and stronger.”

He was ordained a priest in the Archdiocese of Nyeri, Kenya, and served as vice rector and dean of students at Christ the King Major Seminary in Nyeri. He was director of USA Mission Appeals for the Archdiocese of Nyeri before coming to the United States in 1994. He has served as an associate pastor, parochial vicar and priest-in-residence at several parishes in New York state and New Jersey and co-founded the St. John’s Kenyan Children Foundation with parishioners from Garden City, N.Y., to raise funds for poor children in Kenya. Father Muteru has been an adjunct assistant professor at Dowling College in Oakdale, N.Y.; Molloy College in Rockville Centre, N.Y., and St. John’s University in Queens, N.Y. He was chaplain at St. Joseph’s College of Maine in Standish, Maine, from 2018 until last year, when he joined Marymount.