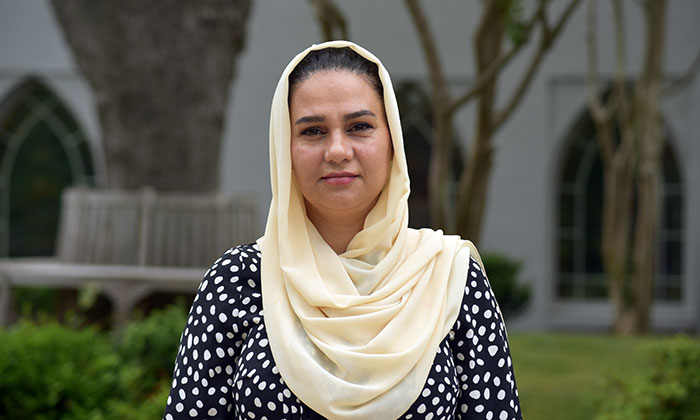 In late August of last year, Muzhgan Yarmohammadi was fleeing her native Afghanistan and everything that she knew as the country collapsed to the Taliban after decades of conflict and the withdrawal of U.S. troops. With uncertainty clouding her future, she – and her family – then spent several months transitioning from place to place in the U.S. mainland as refugees.

But now, Yarmohammadi has found stability in the national capital region along with a renewed purpose, serving Marymount University as a Research Fellow in its Center for Diversity, Equity and Inclusion (DEI). She started in this role in April, and is using her background in advocacy for women’s rights and people with disabilities, project implementation, program management and partnering with civil society organizations as she engages in special projects and research assignments on behalf of the Center.

“The United States is so much more diverse compared to Afghanistan, where diversity is limited and the ethnic differences that do exist have been a major driver of conflict,” Yarmohammadi explained. “Here in the U.S., diversity takes on a more positive form and covers a wide range. Specializing in this work has been a transition for me, but I’m learning a great deal each and every day and I’m trying to contribute to the DEI Center’s research, work and activities in any way possible.”

“Muzhgan has been a tremendous asset to the Center for Diversity, Equity and Inclusion and the entire Marymount University community,” added Dr. Delario Lindsay, the Center’s Interim Director. “She came to us with a deep set of valuable skills and, more importantly, with an intellectual curiosity that should allow her to excel here at Marymount, particularly in programs that have initiatives which are community-focused. These can be found in the DEI Center, as well as within our growing Truth, Racial Healing and Transformation (TRHT) Campus Center.”

Growing up in Afghanistan and in a society that prevented female participation in various aspects of life, Yarmohammadi continuously faced obstacles to receiving education. Her family temporarily moved to Pakistan, where she completed her high school studies, because of safety concerns due to their Tajik ethnicity. She also experienced discrimination from some of her own professors in Kabul while completing her bachelor’s degree in Law and Political Science.

Despite societal pressures, Yarmohammadi pursued her passions in women’s rights, political participation and civil society engagement. Following five years of working for disability rights groups, she served as a Program Manager at the National Democratic Institute in Kabul, where she strived to help women grow their political power and run for public office. Then, from 2017 to 2021, she specialized in rule of law concerns as a Senior Program Officer at the United States Institute of Peace in Afghanistan, while also overseeing the implementation of psychosocial counseling and establishing access to justice projects. Beginning in 2019, she began a master’s program in International Relations, Peace Building and Diplomacy at Kardan University.

However, the Taliban takeover in 2021 changed everything for Yarmohammadi – halting her graduate studies, her job and threatening her own safety as well as her family’s safety, as the group targeted female activists and those close to them.

“Hopelessness prevailed, as no one was expecting it to happen so soon. No one was ready, and everyone was so worried and concerned,” Yarmohammadi recalled. “And of course, there was the overall disappointment that the past 20 years of achievements for women in Afghanistan were in jeopardy.”

Yarmohammadi, who was pregnant at the time, was free to leave the country as the holder of a special immigration visa. Despite challenges, she was eventually able to get her family members added to lists of activists who needed to be evacuated as well. They secured an exit from Afghanistan on a military plane, despite enduring harassment from the Taliban outside the airport and a tense emergency landing on the way to Germany. Making their way to the U.S., they stayed at Fort McCoy in Wisconsin for two and a half months before ultimately settling in Northern Virginia.

Now, in a new country with her husband and five-month-old son, Yarmohammadi is grateful for her safety – but is also concerned for those left behind, especially women.

“The women in Afghanistan today are strong, and they are not going to go backward anymore. It’s not acceptable for them to have to lower their standards to the Taliban’s level,” she said. “There’s a moral responsibility for the U.S. and others to help the people of Afghanistan find a realistic and durable solution that can serve all of the ethnic groups in the country, and help realize the fact that women’s rights are as equal to men’s rights in moving the nation forward.”