Study abroad programs are fully integrated into the politics curriculum. Students at Marymount are strongly encouraged (although not required) to take their study of politics global, through coursework and field experiences at any of a number of partner institutions abroad. Some experiences are as brief as one week, others last up to two full semesters. See Marymount’s Center for Global Education for more details.

Students who travel abroad for a semester or more may complete coursework that meets some of the requirements for the liberal arts core and for the politics major. Here are some examples of Politics students who spent a full semester abroad:

“Studying abroad is best decision I’ve ever made! Being in Spain has helped me open my eyes to new things such as language and culture. Since I am taking a Social Justice class, I have been able to appreciate different Europeans’ opinions on current events and see how those correlates with Americans’. I’ve also have the experience to be part of a community service club called “Bocatalk” were student give out “bocadillos,” sandwiches, to the homeless community around the city. This is an important service experience that has helped me grow as a human being and appreciate all my privileges.”

“During the semester I was able to take courses on Human Rights and Public International Law as well as an on-site class, visiting ancient Roman and early-Christian ruins and monuments up to the time of Mussolini. Having the opportunity to take such courses at an American university in the heart of Rome with an international student body was a privilege as it allowed me not only to enjoy my city but also to meet new people, interact with different perspectives and cultures and appreciate the American university system and all the opportunities it offers students.”

“My time at Oxford was definitely one of the highlights of my college career. There I had the opportunity to take two very different classes. The first was a literature seminar that I took with several other Marymount students. The second was a tutorial that I took with an Oxford professor that covered Post-Gulf War weapons inspections in Iraq.In the end, I greatly enjoyed both these classes and I’m certainly glad that I had the opportunity to be a part of this program.”

“Living and studying in Sydney for the past six months has been an experience that I will never forget. From taking an American politics class to an Australian history course, I have learned more about another culture from my own than I originally would have thought. Learning and immersing yourself in another culture only broadens your perception of the world around you. Being abroad has also allowed me the ability to travel to other countries such as Indonesia and Singapore. These experiences have led me to become friends with people from all across the world, which gives me comfort knowing that wherever I go I’ll have a friend. Studying abroad is something that not everyone gets the chance to do, and I am glad that I was someone that got that chance.”

“My time studying in Jordan is not something that can be fairly captured in words. I took a class on the Israeli/Palestinian Conflict along with an Introduction to Arabic course. Nothing can quite compare to learning about the Israel/Palestine conflict while living minutes from Palestinian refugee camps, or taking your first Arabic course in a country that requires you to practice just in order to make it from your apartment to school every day. Academics aside, I’ve learned the most through my interactions with the people of Amman, something that a Marymount classroom setting just can’t recreate. Studying in the Middle East was so much more than crossing off a few bucket list items like floating in the Dead Sea or riding a camel through Wadi Rum- I truly am grateful because I feel it has better shaped me as a human being.”

“When I am asked about my study abroad experience I am often left speechless-not because I don’t know what to say but for the same reason I have re-written this paragraph a hundred times. There just aren’t enough words to accurately explain my time in Thailand. I was able to immerse myself into a completely unfamiliar culture, befriend individuals from all over the world, and travel to beautiful destinations. It may sound cliche of me to say that studying abroad changed my outlook on life and given me a deeper appreciation of everything, but it truly has. Taking courses where I could learn about the various political systems of Southeast Asia and then travel to those countries I was studying was just the hands on experience I needed. I definitely consider Thailand a second home and I would return in a heartbeat.”

Several Politics courses give students the chance to complete a short trip abroad as part of a regular semester-long course at Marymount. These courses meet through the fall or spring semester at Marymount and then include an additional set of experiences as the class travels as a group to an international site during either the winter or spring break. Typically, the program offers one or two of these Global Classroom courses every year. Here are some recent examples from before the Covid pandemic; the program is planning on restarting these courses soon.

In Fall 2016 the class visited the United Arab Emirates for briefings on issues related to regional and global security and meetings with local students and organizations. Course photo album from the last trip. 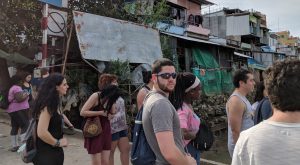 Periodically in the fall semester Politics 241 travels as a class to Southern Vietnam for a week of field experiences at the end of the semester, learning about the politics of globalization firsthand by meeting with workers, entrepreneurs, students, Vietnamese government officials, and American Foreign Service Officers and others working in the country. Course photo album from the last trip.

Periodically in the spring semester Politics 310 travels as a class to London for meetings with British political party leaders and activists as part of a comparative exploration of how parties work in the United States and the United Kingdom.

Politics 382 occasionally travels as a class to Strasbourg and Paris, France, for one week of site visits to French and European Union institutions and for meetings with European students and French, European, and American political leaders and diplomats. Course photo album from the last trip.

Course photo album from the last trip, to Seoul, South Korea. The course will tentatively travel to Taiwan at the end of the fall 2023 semester.